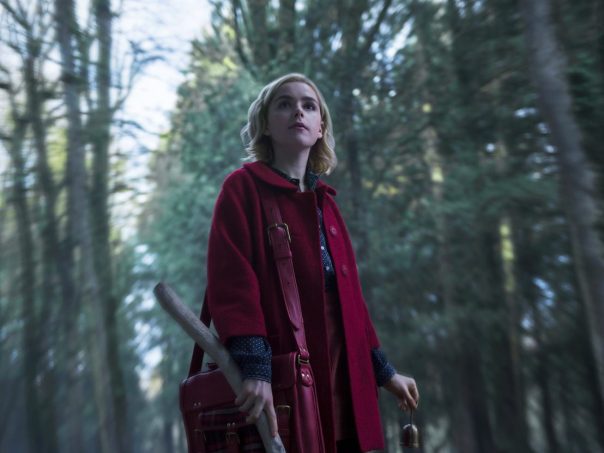 In Netflix’s new adaptation of Sabrina the Teenage Witch there are so many plot threads it’s difficult to keep track of them all. In just the first episode there’s the introduction of the “big bad”-esque Mrs. Wardell (Michelle Gomez), before Sabrina is hexed by the Weird Sisters (Tati Gabrielle, Adeline Rudolph, and Abigail F. Cowen) who have a Malfoy family like hatred for witches who aren’t pure blood. Another antagonist is introduced in the principal Hawthorne (Bronson Pinchot) who doesn’t want to reprimand jocks for the sexual assault of pulling Sabrina’s tomboy friend Susie (Lachlan Watson)’s shirt up, and in the second episode she deals with the bullies themselves. The key storyline is Sabrina’s upcoming witch baptism on her 16th birthday which would lead to a new school and new powers, but she has to decide whether it’s worth losing normal life and her relationship with her friends Susie and Ros (Jaz Sinclair) and boyfriend Harvey (Ross Lynch) who she hasn’t told she’s a witch. This introduces another antagonistic figure in Father Blackwood (Richard Coyle) as the devil’s Earth representative to push her towards going through with it, while Sabrina’s zealot aunt Zelda (Miranda Otto) becomes increasingly antagonistic herself and vicious to the beta aunt Hilda (Lucy Davis). Eventually the devil himself in scary enough goat form arrives to establish he is the real antagonist to worry about. If that wasn’t enough Sabrina and her friends look to start a women’s activist group, she learns her parents deaths and family tree aren’t what it appears, a spirit shows up as her cat Salem, and her cousin and confidante Ambrose (Chance Perdomo) discovers there’s a witch hunter on the loose.

Unsurprisingly juggling so many plots comes at a cost. After her introduction Mrs. Wardell who may as well be wearing a neon sign saying “WAKE UP SABRINA, I AM EVIL” in all their scenes together, largely comes off as a toothless spectator through the first two episodes after being supplanted by other satanic characters like Aunt Zelda, Father Blackwood and the devil. There’s little time spent on developing Harvey beyond being unknowing and pretty, nor is there anything known yet through two episodes about Sabrina’s best friend Ros. At one point after having a revelation involving her parents during a vision in a bathtub, she awakes and rushes to finds Ambrose… to resolve the plot of getting revenge on principal Hawthorne.

The climatic baptism is most exciting of the two episodes as Father Blackwood and his satanists are foreboding and the scene plays like Sabrina on the verge of joining a cult. The orange hue representing Sabrina’s hell-ish visions are effective, less effective is the show’s infamous blur screen. There is no rhyme or reason when the show chooses to enter blur vision, instead of say it representing magic being cast, it happens at any given time such as a mundane scene like Sabrina entering her house.

Kiernan Shipka does her best to bring life to Sabrina. There’s a moment early on where after reaching a new level of emotional connection with her boyfriend, Sabrina enters her house and dances in jubilation after using magic to play “Be My Baby” by the Ronettes. Later in the episode, Sabrina looks up to the trees and comments to Harvey she loves the sound of wind blowing through them, or has to show the pain of the secret she can’t tell him. In both Shipka shows being a teenager is sometimes fun, but as often painful and self serious. Otto and Davis playing Sabrina’s often at odds aunts also bring a spark in their scenes and Perdomo as Ambrose is likeable. However these moments of life are often few and far between, as more often than not the show has too many plot threads and exposition to address to really look up and admire the wind.